Sex-dependent differences in the effectiveness of medicines are well known in medicine. Men and women differ in many ways with regard to the use and effect of drug treatments. [1]  However, there is little interest in drawing consequences for practice in this regard, and gender-sensitive pharmacotherapy has hardly found its way into practical medicine to date. [2] [3]

Since hormone status and psychosocial differences between the sexes obviously play a major role, sex-dependent differences in drug effects and thus also in drug therapy must be taken into account. This applies above all to the question of the correct dosage in order to implement pharmacotherapy with as few side effects as possible. Regulatory authorities therefore demand that the evaluation of pharmacological studies be sex-dependent and include a sufficient number of women. Until now, much more has been known about the pharmacology of drugs in men than in women because women have traditionally been underrepresented in clinical trials. [4] I Particularly in the early phase of drug development, women were excluded from clinical trials for many years. Those responsible feared that women could jeopardise the success of a trial or falsify the results due to possible pregnancy or hormonal fluctuations. As a result, the influencing factor ''female sex'' was not included in pharmacological studies for a long time, or only to a limited extent. [5]  Although an evaluation from 2001 showed that women were increasingly taken into account in studies of recent years, a sex-dependent subgroup analysis was only conducted in nine percent of all studies. [6]

Metabolism and effects of drugs

Sex differences exist in ''pharmacokinetics'' (the movement of a drug through the body) and in ''pharmacodynamics'' (effects of the drug at the target site). Although the pharmacokinetics of new substances are usually described separately for men and women, the treatment effects (pharmacodynamic effects) are almost never studied in a gender-sensitive way. [7]  The possibly specific effect of women on a high number of existing drugs is simply not known.

Why women react differently to some drugs than men and generally experience adverse drug reactions more frequently can be explained, at least in part, by differences in pharmacodynamic and especially pharmacokinetic factors. [8] [9][10]  [11]

Sex-related physiological differences mean that drugs are absorbed, distributed, metabolised and excreted by the body in different ways and at different rates. .[12]  Data on pharmacokinetics are mainly generated in phase I studies. Bioequivalence studies, which found sex-dependent differences in pharmacokinetics for numerous drugs, support the importance of sex-specificity. [13]

The bioavailability of a drug is determined by the rate and extent of absorption into the bloodstream. It occurs in the intestine for most drugs, with active transport back into the intestinal lumen reducing the systemically available portion. Gastric acid secretion or gastric emptying time, as well as gastrointestinal blood flow and size of the intestinal absorption area, are factors that vary by sex. Men's and women's dietary habits also differ, which may have potential implications for drug absorption. However, no differences have yet been found in either gastric acid secretion or gastral and intestinal secretion between the sexes. [14] [15]  Whether there are also sex-dependent differences in the influence of gastrointestinal motility has not yet been clarified. While no sex-dependent differences were found in animal experiments, [16]  in humans the findings point to a direct influence of sex hormones. Some findings suggest that women have a delayed gastric emptying for liquids and a slower intestinal passage.[17] Differences in enzyme equipment are also known. For example, men have a significantly higher activity of gastric alcohol dehydrogenase than women, resulting in the significantly higher bioavailability of alcohol in women. [11] .Although there are sex-dependent physiological differences, there do not appear to be clinically significant sex differences in the absorption of drugs through the skin and into the lungs.[18] [19]

Sex-dependent differences in the distribution of drugs are based on differences in body size, muscle mass, fat and water content. Women have a significantly higher fat content than men, while the male body has more muscle tissue and more water. [20]  Lipophilic drugs remain in the fatty tissue longer in women than in men at the same dosage. Since they first have to be mobilised from the fatty tissue, they are broken down with a time delay. Effects and side effects last longer. The opposite is true for hydrophilic drugs: the plasma concentration of water-soluble substances is lower in men than in women. Typical examples of a larger distribution volume and a longer elimination half-life are the lipophilic drugs diazepam and midazolam. They have a longer effect in women. Such sex-dependent differences have also been described for muscle relaxants. If they are dosed according to body weight, a significantly deeper muscle blockade and longer duration of action can be observed at the same dosage. Pharmacokinetic parameters and their sex-dependent influences on the distribution of drugs are shown in figure 1. [21] 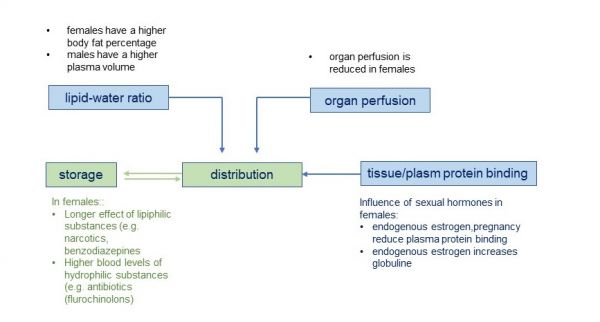 Figure 1. Pharmacokinetic parameters and their sex-dependent influence [Source: GenderMed-Wiki (2022), modified according to Nieber (2015)].

There is also evidence of sex-dependent differences in the plasma protein binding of drugs. In women, the binding of some drugs to the α-acid glycoprotein is somewhat stronger. However, the clinical relevance of these differences has not yet been proven. Several effects must certainly come together before such a  difference actually becomes clinically relevant.

Relevant sex-dependent differences exist essentially in drug metabolism. The most important phase I enzymes for the degradation of drugs in humans belong to the family of cytochrome P450 enzymes (CYP450). The variability of the function of these CYP450 enzymes is one reason why the intensity and duration of effects and side effects can vary greatly at the same dosage of a drug. Sex-dependent differences have been described for several of these enzymes. [22] In women, the mRNA concentration of CYP3A4 and the actual protein concentration in the liver are on average 2-fold higher than in men. The increased enzyme expression correlates with an approximately 50% higher in vitro metabolisation rate of verapamil, whose N-dealkylation occurs via CYP3A4. Accordingly, an increased in vivo clearance is found for verapamil in women compared to men. [23]  The same applies to nifedipine [24]  and methylprednisolone, [25]  which are also CYP3A4 substrates. The β-blockers metoprolol carvidolol or nebivolol are predominantly degraded via CYP2D6. Women have higher maximum plasma concentrations after a standardised daily dose than men. ref]Luzier AB, Killian A, Wilton JH et al. Gender-related effects on metoprolol pharmacokinetics and pharmacodynamicsin healthy volunteers. Clin Pharm Ther 1999;66:594–601.</ref> Since the concentration-response relationship between plasma concentration and reduction in heart rate is the same in men and women, women experience significantly greater side effects at the same dosage. This is particularly significant as plasma concentrations are increased again by oral contraceptives. Although β-blockers have a wide therapeutic range and therapy usually begins with a low dose that is increased according to effect and tolerability, adverse drug reactions are significantly more frequent in women than in men. For β-blockers with CYP2D6 independent metabolisation such as sotalol, bisoprolol or atenolol, there are no sex-dependent differences in the plasma concentrations and side effects, so they may be more suitable for women. Phase II metabolic responses also vary by sex. For example, the activity of glucuronidating enzymes appears to be lower in women than in men. This would explain why ASA is metabolised about 30-40 % slower in women than in men. Similar findings have been made for paracetamol, clofibrate and phenprocoumon, all of which are made excretable by glucuronidation. [26] [27] [25]

Among the methylating enzymes, the activity of thiopurine S-methyltransferase in particular appears to be lower in women than in men. This could be the reason for the higher bone marrow toxicity of the thiopurines azathioprine and 6-mercaptopurine in female patients [28]

For an overview of sex-dependent in various pharmacokinetic parameters, see Table 1. [29]

Compared to pharmacokinetics, there are fewer findings on sex-dependent differences in pharmacodynamics. The reason for this is that pharmacodynamic effects are much more difficult to study. However, some drugs have sex-dependent different effects despite identical plasma concentrations. Genetically determined differences in the number and localisation of binding sites for drugs (receptors, transporters, ion channels) are assumed to be the cause. For example, certain opioids dock more precisely at the corresponding binding sites in women than in men. [30] Experimental studies have shown that the binding potential to the opioid receptor for morphine, fentanyl, alfentanil and remifentanil is significantly higher in women than in men. [31]  The better responsiveness of SSRIs in premenopausal women is an indication that oestrogens influence the serotonin receptors. [32]

New experimental results further suggest that sodium transport in airway epithelial cells also shows sex-dependent and that here too oestrogens have a modulating effect. This would have implications for the therapy of respiratory diseases. [33] [34]

The sex-dependent differences in pharmacodynamics also lead to different profiles of adverse drug reactions (ADRs). Various studies show that women are more frequently affected by adverse drug reactions than men. [35]  For example, women are 50 to 70 percent more likely to experience adverse drug reactions than men. For example, drugs that potentially prolong the QT time of the heart (i.e. a prolongation in cardiac conduction such as antiarrhythmics, antipsychotics, antihistamines and antibiotics) can lead to arrhythmias, especially in women. Women are about twice as likely as men to suffer life-threatening arrhythmias from taking such drugs. This can also be proven in animal experiments on isolated rabbit hearts. [36] his observation should be particularly relevant for drug safety, but it is usually not taken into account in treatment. .[37]  In addition, there is an increased incidence of drug-induced liver toxicity, adverse gastrointestinal events due to steroidal anti-inflammatory drugs, and drug-induced allergic skin rashes in women. [38]

As expected, the amount of medicines prescribed differs according to age and gender (see figure 2). [39] [40]  30 to 40 percent of all patients older than 65 years take at least four medicines.

Drug therapy is therefore mainly carried out in patients who, due to their age, have an above-average risk of side effects from treatment and who have been investigated less frequently than average in drug studies. This means that evidence that can be derived from studies is lacking precisely for the patients who are mainly treated with the drugs. With regard to sex, an overview of the prescription of medicines by the largest German health insurance fund shows that women were prescribed an average of 22.3 percent more medicines than men in 2011 (the average number of medicines per 100 insured persons was calculated).[41]  In addition, there are a number of medicines that women are prescribed significantly more often than men. These include sex hormones, osteoporosis drugs, thyroid therapeutics and minerals. Antithrombotic agents as well as lipid-lowering agents are prescribed more frequently to men than to women. [42] 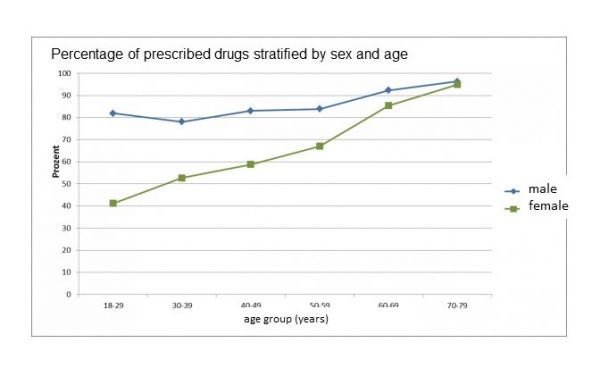 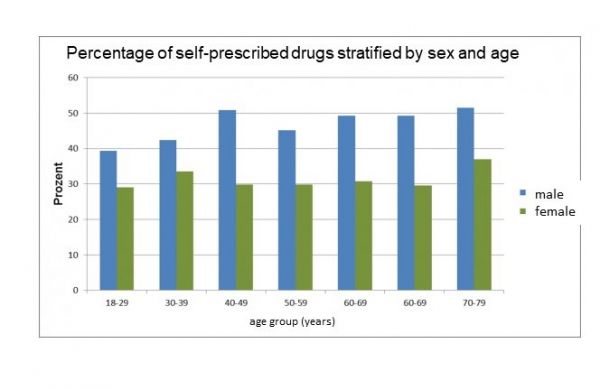 Sex  differences with regard to psychotropic drugs, painkillers and cardiovascular drugs are examined in more detail below. 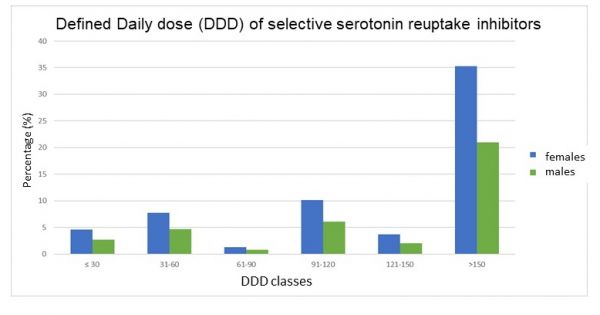 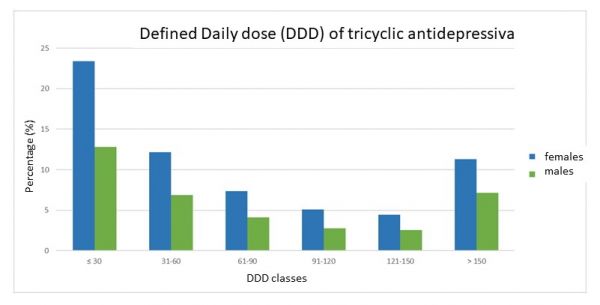