Use of professional medical services/Expert

< Use of professional medical services

In 2011, women consulted their family physician an average of 6.1 times, men only 4.7 times for medical assistance. [1] Women experience more health problems and visit practices of all disciplines more frequently than men. The causes of these health problems, like their effects, are not definitively known. [2]

The relative difference in seeking medical assistance is greatest for urinary tract symptoms. In 2011, 12 percent of women but only four percent of men visited their family physician for urogenital problems. [1]Other diseases for which there is a significant difference are anemia and diabetes mellitus. Here the sex difference in the behavior of those seeking help can be observed across all ethnic groups. The difference is greatest however among persons of Turkish descent.

In addition, the number of hospital admissions is 20 percent higher among women than men. Admissions due to pregnancy and childbirth must be considered, although the difference after correction is still ten percent higher among women. The largest difference in this respect (apart from diseases of the urogenital system) is due to disorders of the nervous system and the muscles or joints. With regard to these diseases, women are treated in hospital 50 percent more often than men. In contrast, men are admitted 1.4 times more often than women due to cardiovascular diseases. Related to diseases of the digestive system, both sexes are treated inpatient with about the same frequency. Looking at the population over 60 years of age, more men than women are treated inpatient. The main causes are primarily cardiovascular and oncological diseases. [3] [1]

One consequence of this different use of professional help between men and women is the significantly different number of sick leaves. This results in different numbers of days absent from work between women and men. In 2015, women were absent from work 14 percent more frequently than their male colleagues. The current DAK Health Report from Germany describes several reasons for this: For example, cancer and mental health problems are more common reasons for absenteeism among women than among men (although men on average are more likely to contract cancer). In comparison, men are more often absent due to injuries. It was also found that women are more likely than men to work in industries or professions with higher incidence of sick leave and are more prone to presenteeism (i.e. going to work sick). Finally, mothers are more likely than fathers to call in sick to take care of their children at home when they are ill. Figure 1 shows differences between male and female in the number of days absent from work due to different types of illness (based on the DAK Health Report 2016). [4] 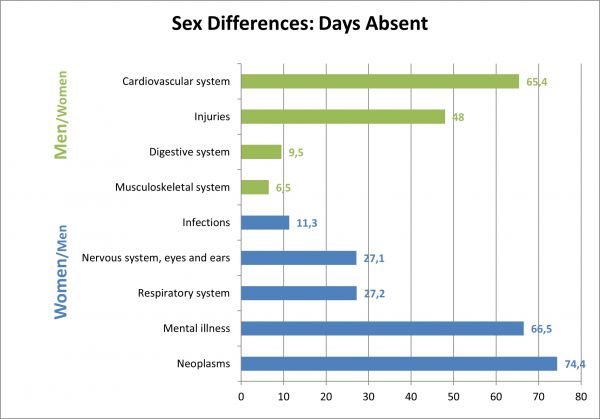 "Gender differences in occupational days of absence due to different areas of illness." [Source: GenderMed-Wiki, according to: DAK Health Report (2016)].

You can find more on this topic under Module 1: Sex and Gender in medicine