For many years it was believed that itching (pruritus) was a sub-form of pain ("the little brother of pain"), as it can be relieved by painful stimuli (e.g. scratching). We now know that there are some parallels, but also clear distinctions between the two. [1] Chronic pruritus (longer than 6 weeks) is not only caused by skin diseases, but by many different diseases. According to the guidelines, pruritus is divided into 6 categories. For more details see Table 1.

Table 1. Classification of chronic pruritus according to the European Guideline. [2]

Chronic pruritus (CP) is quite common in the general population - almost one in four people are affected by it in their lifetime. [3] In a study by Ständer et al. it was determined that slightly more women were affected by CP than men (about 55% versus about 46%). [4] Differences were also found with regard to the underlying disease, associated diseases or subtypes of CP (see Table 2):

Table 2. Differences between men and women with regard to CP.

Those affected by CP often suffer considerably, which often leads to psychological illnesses such as depression or anxiety. More women than men are affected by anxiety or depressive symptoms. [4] [5] Whether anxiety and depression are also risk factors for chronic pruritus is not yet known. Individual studies have shown that social support (e.g. from friends or family) has a positive effect on CP. [6] [7] This may be explained that those affected can cope better with stress through social support [6], which in turn plays an important role in maintaining chronic prurits. However, it is still unknown whether there are any sex or gender-specific differences present.

Although the signal pathway of CP (see Figure 1) has been intensively researched in recent years, knowledge about differences between men and women suffering from CP is very limited. As early as 1990, however, it could be shown that women presented a stronger response to the itch-inducing substance histamine than men (stronger itching sensation, stronger skin reaction). [8] However, this stronger response was probably not caused by nerve fibers, but by other physical as well as psychological factors. No sex-specific difference in redness was found in a study by Hartmann et al., who injected 15 men and 15 women with different itch-inducing substances into the skin. [9] The research group concluded that there were no differences in nerve fiber architecture. However, this hypothesis was not confirmed by skin biopsies. Sex- differences in the qualities of itch sensation was shown in a study with a large sample of patients by Ständer et al. [4] Here women reported increased pricking as well as warmth and pain during pruritus. Men were able to relieve itching better through heat, but women through cold. These results indicate that women are more likely to have nerve fibers affected. Due to the different response to cold and heat, it also seems likely that the nerve receptors distribution differs in men and women. This is supported by another study that found that women and men perceive itching on the lower legs and forearms differently. [10] Overall, several studies have shown that women perceive itching more intensively than men in general. Cite error: Closing </ref> missing for <ref> tag 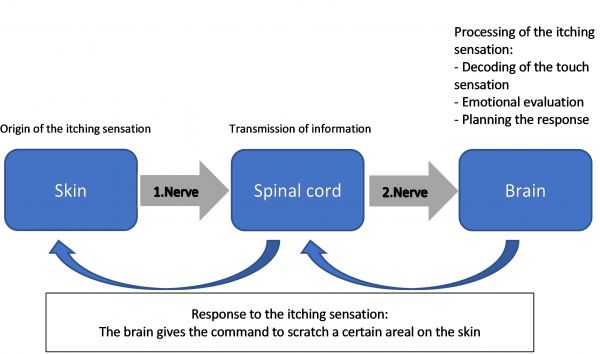 In addition to possible sex-differences in the body periphery, a different way of processing itching sensation in the brain also appears to be in part responsible for differences between men and women suffering from CP. Processing of itch sensation activates various brain regions.  One area for example is responsible for deciphering the tactile stimuli ("where and to what extent does it itch in the body"), another for emotional evaluation ("how unpleasant is the itching") and a third for planning the response to the itching stimulus - scratching (see Figure 1).

To date, there is only one study that has investigated sex-differences in this context. [10] Among women, an increased activation of those brain regions responsible for decoding the tactile stimuli, emotional evaluation and action planning was found. Therefore, in correlation with studies on pain processing, it would be feasible to assume that women experience itch more strongly, both emotionally and mentally. The increased activation of brain regions responsible for action planning could also explain why women tend to scratch more, leading to larger lesions and scratch marks on the skin. [4]

According to the European guideline, there are 3 manifestations of CP: [2]

One previous study indicated that women suffer more often from CP with numerous scratch lesions. [4]Why this is the case is not yet known. It is conceivable that women perceive itching more strongly and process it in the brain differently than men, which could lead to a stronger scratching response (see pathophysiology).

With regard to diagnostics, according to present knowledge, no sex differences have been reported to date.

Sex and gender aspects in the management of patients have not yet been investigated according to present knowledge.

Unfortunately, there is no knowledge about whether men and women would benefit from different therapies because studies on this aspect are lacking.

To date there are no studies that have investigated the role that sex plays in the interaction between physician and respective patients in CP. There is, however, a study by Stumpf et al., [11] which assessed whether differences will be seen when men and women are injected with a pruritic substance by a female or a male researcher. Before the substance was injected, neutral or exaggerated instructions ("this substance causes extreme itching in most people!" to trigger a nocebo effect) were given. In this study it was found that men and women did not differ in terms of skin reaction (redness and wheals) or intensity of itching. However, in contrast to male researchers, female researchers triggered stronger skin reactions in combination with the nocebo instructions. It can be assumed that the study subjects were more stressed by the female  than by the male researcher performing the testing. That stress can intensify skin reaction to pruritic substances was shown previously in the study by Kiecolt-Glaser et al. [4]It is possible that a female researcher was expected to behave more empathically than a male researcher. When this expectation was not fulfilled, study subjects may have experienced increased stress, which may have led to the intensified reaction. However, this assumption is highly speculative, so further studies would be necessary to confirm this hypothesis.

No studies on sex differences in this regard have been published to date.

The knowledge of psychosocial factors related to pruritus is very limited (see also risk factors). Bathe et al. were able to show that patients with chronic pruritus often felt misunderstood by their physician, which can lead to significant difficulties in adherence to the treatment recommendations. Whether there are differences between men and women in this respect is unclear. [12]

Apart from biological differences in itch sensation, not only different behavioral patterns (increased scratching in women) seem to play a role, but also coping strategies and the resulting psychological impact. According to the current data, women not only seem to perceive itch more strongly, but also seem to suffer more severely from it, which can lead to increased psychological symptoms such as anxiety and depression. [4] [5] In addition, the size of the affected area of skin appears to be of relevance. For example, in a study by Stumpf et al. statistically women presented correlations between overall pruritus present at the onset of symptoms and anxiety and depression scores. [5] In men, scratching seemed to play a greater role. Here, significant correlations between depression scores and a group of patients with numerous marks caused by scratching became apparent. It might therefore be postulated that feelings of loss of control or even helplessness regarding the frustrating itching in men could promote feelings of depression.

However, itching also appears to have a more lasting effect on the quality of life in women compared to men. [4] From studies that have examined male and female patients with other partly disfiguring skin diseases, it is known that young women in particular suffer from the diseases, whereby the desired role or the common ideal of beauty in society constitutes an important factor. [13] [14] Whether this can also be transferred to patients with CP would need to be investigated in further studies.

Currently, there are no studies available in the literature that have investigated this issue.

To date, some studies with male and female patients as well as experimental studies have shown some sex differences. However, many issues have not yet been investigated at all or very minimally, so that it is imperative to conduct further studies in order to provide sex and gender tailored diagnostics and therapy to the affected patients.