Module 1: Sex and Gender in medicine/Introduction

< Module 1: Sex and Gender in medicine

There is an increasing theoretical and practical relevance for sex and gender sensitive medicine, particularly with application of the individualized care concept. Classified as a potential risk factor for the development and course of disease, sex and gender factors have significant influence on the entire treatment process. Sex and gender-sensitive medicine is not represented as a single discipline but rather an interdisciplinary approach to care, creating newfound dimensions and perspectives within almost every area of medicine. The concept underlying this perspective is self-evident: Women and men differ in many ways. It is important to recognize that these differences are by no means limited to anatomical and physiological characteristics. Rather, biological (sex) and social differences (gender) with regard to aspects such as disposition, prevalence, coping strategies and therapy adherence must be taken into account in order to ensure adequate treatment plans. The care process is not only affected by the sex and gender of the patient but can also be influenced by the sex and gender of the medical personnel providing care. [1]

The English terminology for gender (as opposed to the German term “Geschlecht”) provides a clear distinction between social and biological factors. The term “gender” describes social factors and thus refers to gender-specific roles which are influenced by environmental factors such as socio-cultural expectations und educational structures in child rearing. In contrast, biological factors (for example chromosomes, sex hormones, the immune system and metabolism) are associated with the term “sex”. [1]Most importantly, sex and gender should not be regarded as separate entities but rather a composite of lifelong interactions on biological and social levels.

In 1998, the Federal Statistics Office published the first health report for Germany which showed a clear deficit: only very few of the processed data were differentiated according to sex, although 20 years of research and experience with women’s health already existed. [2] However, those results were not included in the general health report. The specific deficits in the report encouraged a nationwide discourse regarding sex and gender in medicine. Only a few years later (in 2001), the German Department for families, elderly, women and youth published a report on the health of women based on the bio-psycho-social understanding of gender and health or illness and it is still seen today as an important milestone in the development of sex and gender-sensitive medicine. [3] The discourse in Germany led to connection with international health policies and in 2002 the World Health Organization (WHO) of Europe published a statement emphasizing the importance of sex and gender in health research. [4] Although sex and gender-sensitive medicine is far from being sufficiently implemented in medical theory and practice, the topic of “Sex and gender in health” has made significant strides since 2002. Progress can be observed both in medical and interdisciplinary research as well as sex and gender-sensitive care. Sex and gender sensitive health reporting and care practice have developed substantially and now include the topic of men’s health as well. [5]

Relevance of sex and gender in health care

In view of the high cost of health care, the health care system should not disregard such a distinctive characteristic as the sex and gender of the patient and doctor in relation to diagnosis and therapy. Unfortunately, providers still pay too little attention to sex and gender-sensitive differences or similarities. The implications of this practice include many incorrect diagnoses and failure to initiate suitable therapies resulting in serious consequences such as higher mortality rates. [1] Medical treatment is not sex and gender-neutral. Not only the sex of the patient is an influencing factor in the care process, but also sex of the medical personnel can be significant (see also the article on sex and gender of the medical personnel).

A healthy lifestyle can reduce the risk of disease and significantly impact treatment results. Specific factors which influence a healthy lifestyle include smoking, physical activity, safe sex, consumption of alcohol and dietary habits. Both men and women have the potential to positively impact the condition of their health through sensible decision making thereby reducing their risk of acquiring diseases such as diabetes mellitus, cardiovascular illnesses or cancer. However, lifestyle and health-related behaviour differs between the sexes. According to a Dutch study from 2013, men consume more alcohol than women, smoke more frequently and are opioid-dependent significantly more often. The underlying cause relates to the differing interaction with stimulants. [6]

Moreover, women and men differ in their assessments regarding health and illness. There also seems to exist a difference between the sexes with regards to the perception and interpretation of bodily functions. Also, male and female patients communicate differently and present or rather describe their symptoms in different ways (or fail to do so). Men, for instance, are more prone than women to deny health complaints (including psychological problems) or attempt to find their own solution. On the other hand, women outline their health problems earlier and more frequently. [7] In addition, a sex difference seems to exist regarding problem mastery (health-related or otherwise). This results from differing conducts regarding the consultation and use of professional help. It remains unclear whether women “excessively” use health services (women cause higher health costs) or men use health services “insufficiently”. 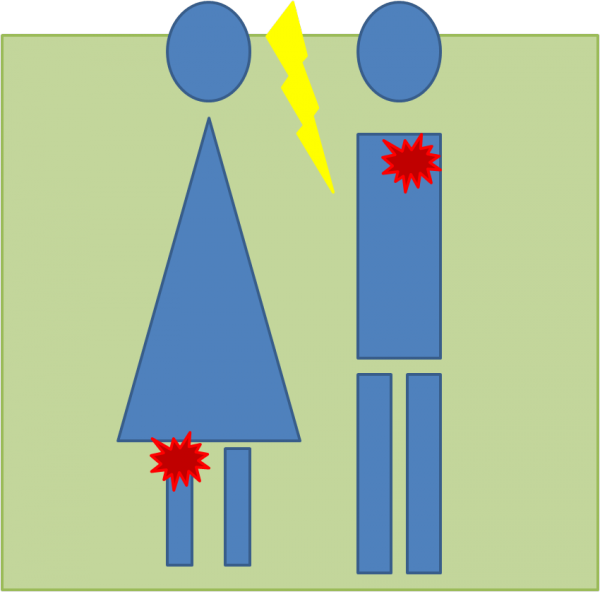 The female sex can be a risk factor for late or missed diagnosis of certain diseases. [8] For example, in women diagnoses of myocardial infarct [8]or HIV [9] are made at a much later stage than men. One reason for this is the assumption that these diseases are classified as "atypical" for women and symptoms are not immediately recognized. Myocardial infarcts seem to be predominantly characterized as a "male disease”. It is not common knowledge that symptoms of a myocardial infarction can differ significantly between the sexes. While the classic symptoms occur in men (e.g. tightness in the chest and pain radiating down the arm), a myocardial infarction in women can manifest as a slow onset of nonspecific symptoms: Pain in the jaw and back as well as vasovagal complaints ( sweating, nausea and shortness of breath) are common. [10] The inequality of chances for adequate cardiological treatment and intervention between men and women (women with an acute infarction are transferred to the hospital about 40 minutes later) is made clear in statistical data review of the cause of death: More women than men die as a result of cardiovascular disease, even though it is regarded as a classic "male disease". [11] [12] AIDS is still often considered a disease affecting primarily homosexual men or drug addicts. However, women make up more than 50 percent of AIDS patients. In contrast, stereotypical female diseases such as osteoporosis (often affecting postmenopausal women) are often overlooked in men and little research is done (for example, (young) women are often used as a reference group for bone density in older men). [13]

The development of sex and gender-sensitive health care requires a rethinking of scientific-medical research. Currently, our medical knowledge is primarily based on the male organism (male subjects and male laboratory animals). For example, in 22 to 42 percent of physiological, neuroscientific and biological studies, the sex of the test animals is not apparent to the recipients. [14] Research on the male organism is primarily intended to avoid distortions due to hormonal differences. [15] For example, the female hormone level fluctuates during the menstrual cycle and can then interact with experimental results.  Sex specific aspects also need to be increasingly investigated within cell research. [16] [17] In fact, cellular sex differences are not only due to hormonal causes. For example, female and male embryonic neurons exhibit differences in their stress response even before stimulation with sex hormones. [18] The systematic exclusion of female organisms from scientific studies not only applies to fundamental research and drug studies, but to the entire spectrum of medical health care (aside from women-specific health aspects). As a result, inevitable negative consequences have occurred and continue to occur including misdiagnoses and incorrect drug dosing in women (based, among other things, on differences in pharmacokinetics and pharmacodynamics). Increased sex and gender-sensitive research on humans, animals and cells is therefore a necessity and an increasingly vital focus of science particularly through the advancement of individualised medicine. Methodological approaches must not only consider sex and gender separately, but also their interaction with one other. [19]