Impact of sex and gender aspects in depression/Introduction

< Impact of sex and gender aspects in depression

Epidemiological studies show that women suffer from depression significantly more often than men. Longitudinal studies, which allow an estimation of the incidence rates of depressive disorders within a particular time frame, find consistently higher rates of new cases in girls and women (a period of 12 to 20 months showed incidences between 1.6 and 3.4 percent) compared to boys and men. [1] [2] According to data collected in a study evaluating the health of adults in Germany, 13.1 percent of women and 6.4 percent of men aged 18 to 64 years were suffering from depression in 2014 (12-month prevalence). [3] Therefore, women are presumed to suffer from depressive symptoms about twice as often as men. The so-called "gender gap" is especially noticeable with seasonal and atypical depression. [4] [5] [6] In general, differences in prevalence between the sexes have been shown to be internationally consistent. Less clear however, are the conclusions regarding differences in the clinical course of depression in men and women. Nevertheless, the majority of studies show higher relapse and chronification rates in women than in men. [7] 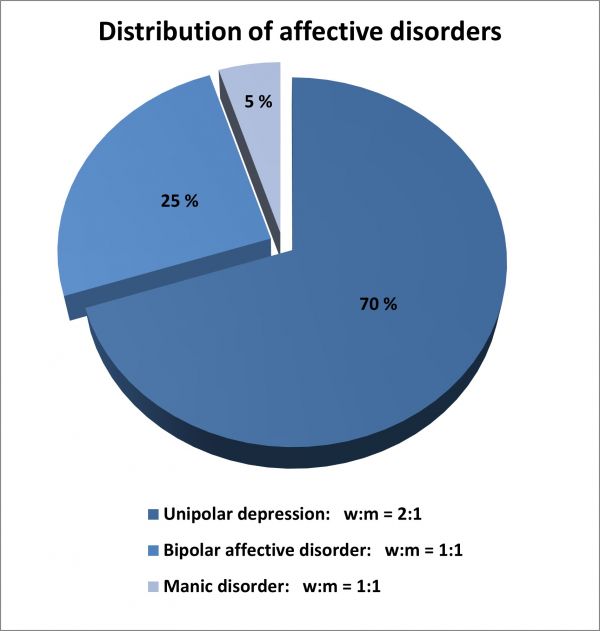 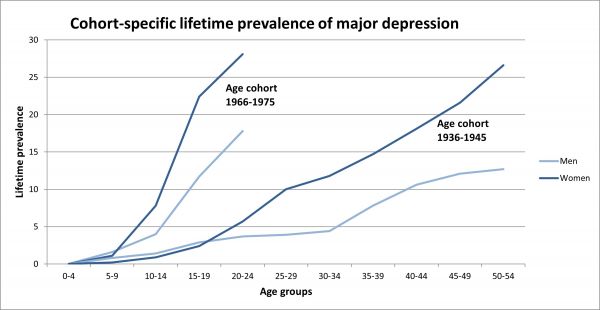 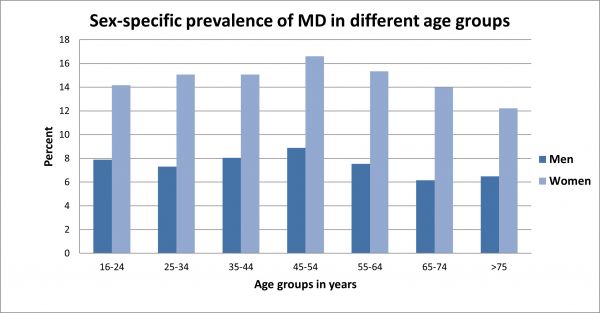 Research on the age-related sex difference shows that the depression rate between female and male patients only really begins to differ at the onset of puberty. [8] During puberty, the prevalence increases overall, with a much greater increase in girls. By the age of 18, women are already twice as likely to suffer from depression as men. [2] It is currently unclear whether the prevalence figures of both sexes converge again in late adulthood. [9]

Studies overwhelmingly confirm the female sex as a risk factor for the development of a depressive episode. The following table lists important biological and psychosocial predictors that are scientifically investigated as causes of this sex difference (Table 1). Psychosocial factors influencing both sexes can be found in section 4.4 ('Psychosocial factors').

While depressive core symptoms such as sadness, depression and anhedonia are mentioned by both sexes with about the same frequency, other depressive symptoms can differ between the sexes. [33] For this reason, depression in men often goes unrecognized. Researchers speak of "depression blindness" in men, which seems to have various causes. One important aspect is that depression symptoms sometimes manifest themselves differently in men than in women. For example, men tend to react aggressively and take risks during a depressive episode and resort to alcohol and drugs more often than women. These external signs often mask the "classic" clinical symptoms, such as loss of self-esteem, listlessness or loss of pleasure, especially at the onset. [34] Such behavioral patterns are often not recognized by professionals as possible depression symptoms but are classified as "typical male defense strategies". [35] In contrast, women are more likely than men to react with atypical symptoms (e.g., increased appetite instead of loss of appetite) or somatic complaints and pain. [33] Overall, they report more symptoms than their male counterparts. [5]

Although the prevalence of depression is significantly higher among women, men are three times more likely to commit suicide than women (with women more likely to make an attempt). Women tend to be more parasuicidal, while men tend to use more aggressive methods. Up to 70 percent of all suicides occur in the context of a depressive illness. [36]

The increased suicide rate accompanied by a lower rate of attempted suicide in the male population compared to the female population is scientifically discussed as a so-called ''gender paradox'' and allows the hypothesis that the low depression prevalence in men is due less to a lower risk of depression than to underdiagnosis (detailed information on gender differences in suicide and suicidal behavior can be found here). [37] [38]

Concerning the clinical picture of men with depression, the following can be observed: The stronger the adherence to stereotypical ideals of masculinity (normative or hegemonic masculinity), the more pronounced the externalized symptoms of depression [39] and the more probable a suicide attempt. [40] In order to be able to reduce suicide rates in men, a male pattern of symptoms must be taken into account in diagnosis and therapy. [41]

The following table (Table 3) illustrates the distribution of depressive symptoms between the sexes. No clear differences between sexes can be assumed here; only trends and results of individual studies are shown.

Table 3: Potential Differences in the manifestation of symptoms between men and women.

Effective coping strategies for mental stress can prove to be successful in preventing the development of a depressive episode. Coping does not have positive (in the sense of health-promoting) effects per se, but rather "wrong" strategies can promote the development of depressive symptoms or aggravate existing complaints. It is therefore necessary to differentiate between health-promoting and health-damaging coping in the prevention and treatment of depressive disorders. Studies confirm sex and gender differences exist in dealing with stressful situations on a cognitive and behavioral level. Overall, women seem to cope with stress in a more emotionally centered way, tend to brood more easily and are less able to distance themselves. Men are better able to distract themselves but tend to react with emotional inhibition in problem situations and are significantly less likely to seek professional help. [44] [5] The following overview (Table 4) presents research results on gender-specific coping behavior in table form.