Although there are numerous anatomical and physiological differences between the sexes, the chromosomal basis of sex determination is quite simple. In humans, women carry two X chromosomes, while men have one X and one Y chromosome. This means that the DNA sequence differs by 1.5 percent between the sexes. The phenotypic differences result, among other things, from the fact that one of the two X chromosomes is inactivated in all women’s tissues. The inactivation is irreversible and affects either the X chromosome of paternal or maternal origin. Since this process takes place during early embryonic development, only the genes of the active X chromosome are read, providing information for the synthesis of the corresponding proteins. Since 15 percent of X chromosomal genes can escape inactivation, women can sometimes produce twice as many of the same protein as men. This can lead to significant differences in metabolism. 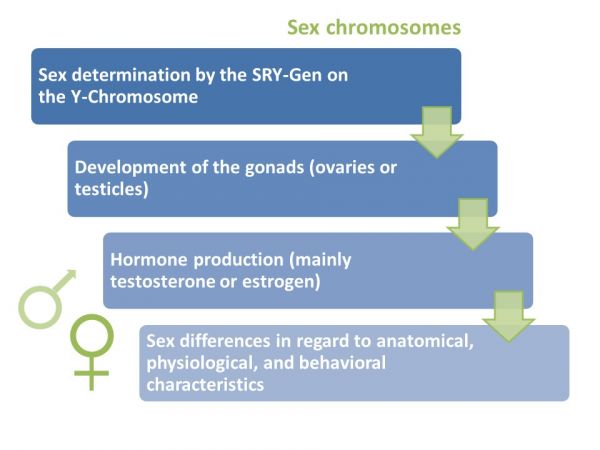 Figure: Effects of the sex chromosomes on the organism [Source: GenderMed-Wiki, after Kindler & Pfleiderer (2012)].

Effects of sex chromosomes on the organism

From the sex-specific chromosome constellation (XX or XY) it is evident that Y-chromosomal genes are present only in men and are predominantly expressed in the reproductive system. Probably only a small part of the Y chromosome determines the male sex: The gene SRY ("sex-determining region of the Y chromosome") on the Y chromosome determines whether a boy (testicles) or a girl (ovaries) develops from the morphologically gender-neutral human fetus during the first five weeks of development. The gonads then take up the production of predominantly testosterone in boys and predominantly estrogen in girls (this production is also genetically regulated). Lastly, there are sex differences regarding physiological, anatomical and behavioral characteristics. [1] It is important to note that the presence or absence of SRY is only the trigger for further reactions. The biochemical, physiological and anatomical aspects of a sex specific development are complex, and many genes are involved in this process. SRY encodes a protein that acts as a regulator for many other genes. [2]

Back to Module 1: Sex and Gender in medicine.